Reincarnation
Everything has its beginning far above the highest mountain, where since earliest time souls have originated and where the souls of the deified ancestors dwell.if an ancestors souls is still subject to desire -it is hungry, as people say- it will come to earth as an incarnating “shadow”.Its rebirth occurs within the same lineage, and grandchildren might bear their incarnating grandfathers souls.

Infant Gods
The baby,which embodies the souls of a reincarnation ancestor, is said to be an infant god or dewa, until it is 42 days old.It is carried about on a family members ship as it id not allowed to touch the impure soil until it is 105 days old.Its first birthday is celebrated 210 days after birth,a year in the Balinese calendar and the mother makes a temple offering to announcement the childs arrival in the village.

Tooth Filing
The ceremony of tooth filing, meant to overcome to elements of man’s bestiality, occurs after a child reaches puberty. the pointed canine teeth are considered animalistic, and all six upper front teeth are filed even. Because of the expense of this ceremony, a number of families mat join in a mass tooth filing to share costs.

Marriage
Full adulthood begins after marriage. During the ceremony, offerings are addressed to the demonic forces, who have to be placated before proper sexual desire is exercised. To show knowledge of domestic duties, a bride and bridegroom may simulate activities such as wearing or washing during the ceremony.

Cremation Tower
A cremation is the most important rite of passage that a family can perform for its loved ones. The body may be buried until a cremation can be arranged, then it is hoisted up an elaborate stairway to a decorated tower supported on a bamboo substructure. The tower is a symbolic representation of the universe, with the upper tiers symbolizing the various heavens where the soul is heading.

Sarcophagus
In a joyous procession, the cremation tower is transported to the grounds where the body is placed in an animal-shaped sarcophagus.
The sarcophagus is the dead’s vehicle to the mountain of the soul’s origin.
Pots of holy water are poured over the corpse, then it and the tower and other
cremation paraphernalia are consumed by fire. 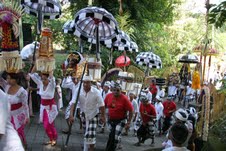 Returning Home
In a final ceremony that may be held years later
the soul is called back from the sea and after several cleansing rituals
taken to the mountain temple and released to return to its heavenly abode.
it has become a deified ancestor
and is worshiped at a special shrine.

Kwangen
The kwangen is a small, triangular offering containing flowers a small betel quid and often Chinese coins. Kwangen are used in the Balinese form of prayer called muspa ( to pray with flowers). The Chinese coins in a kwangen are said to represent human action, purified in the act of worship.

Penjor
A penjor is an offering in the form of a tall, decorated bamboo pole whose gracefully curving upper end is said to resemble both the tail of the Barong, symbol of goodness, and the peak of the sacred mountain, Mount Agung. Penjor are placed in front of each Balinese household for the Galungan holiday 300 and are also used in conjunction with important temple ceremonies and life-cycle rituals. Hanging from the end of every penjor are beautifully plaited palm leaf creations called sampian.

Canang Sari
Canang Sari offerings differ in form and function depending on locality but in general are said to embody the essence or sari of human prosperity, a kind of repayment to the forces of the invisible world for their gifts to human society.
Typically,
canang sari offerings contain flowers, leaves,
liquid fragrance,
and a symbolic betel quid.

Procession Rituals
Procession have different ritualistic functions: to guide the invited gods,
to collect water for the symbolic bathing of the gods, and to present each family’s offering to be blessed by the temple priest.
The gods are invited to enjoy the the essence of the offering, artistic performances, and the various ceremonies.

Prayer
Prayer are followed
by the blessing of the believers
through the sprinkling
of holy water and the application
of blessed rice
on their foreheads.

Greeting The Gods
Dancers circle the temple’s central shrine three times, moving only to the right,
which symbolizes ascent of the sacred mountain.
This ritual is repeated around a shrine in front of the temple where the invisible deities’
followers are greeted.

Dance For The Deities
In ancient ritual dances, some masculine and warlike, the others feminine and graceful, devotees welcome the gods. If the dancers are to the evil spirits of the ground, the dancers pour alcohol as a sacrifice to the earth. Then a temple priast makes offerings to dispel the evil influence once the spirits have been drawn to the site.